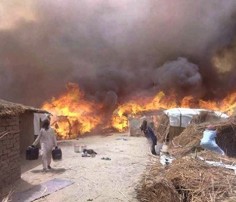 At least 14 people sustained burns in a fresh outbreak of fires at a camp housing tens of thousands of people displaced by Boko Haram jihadists in northeast Nigeria, according to an aid agency.

The outbreak comes just two weeks after a blaze at the camp, located at Rann, about 175 kilometres (108 miles) east of the Borno state capital Maiduguri, killed five people.

“There have been three separate fires reported,” stated a memo seen by AFP from the UN Office for the Coordination of Humanitarian Affairs (OCHA) circulated among international aid agencies in Maiduguri.

According to Punchng The incidents, which occurred over a number of days, resulted in “reported 14 injuries (and) estimates that over 1,000 shelters have been burned,” said the memo, which blamed flying embers from “cooking of food”.

Kaka Ari, a civilian militia member assisting the military in fighting Boko Haram in the town said fires had ruined hundreds of tents. The camp shelters refugees as well as internally-displaced people.