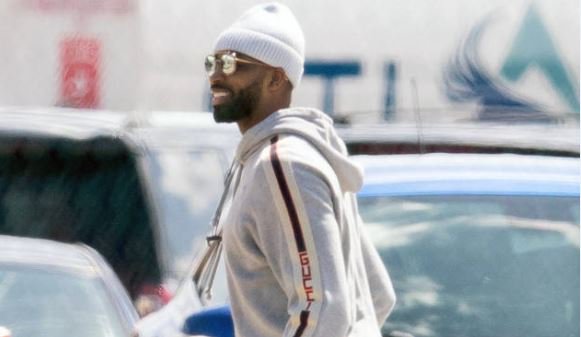 April 20, 2018April 20, 2018 Posted in Uncategorized
The NBA star was all smiles as he boarded the Cleveland Cavaliers’ team plane on Thursday, which is headed to Indiana for Game 3 of their playoff series against the Pacers. His departure comes one week after Khloe Kardashian gave birth to their first child together, True Thompson.

It’s unclear whether or not Thompson will get any playing time during tomorrow’s matchup, as he was benched during Wednesday night’s game. Meanwhile, this marks the first time the 27-year-old has presumably left Khloe and his newborn daughter’s side since he was accused of cheating on the E! reality star.

According to E! News, Some of Thompson’s alleged indiscretions with various women surfaced in several photos and videos published last week.

Despite putting on a united front for True’s birth announcement, sources say Khloe and Tristan’s future remains in limbo.