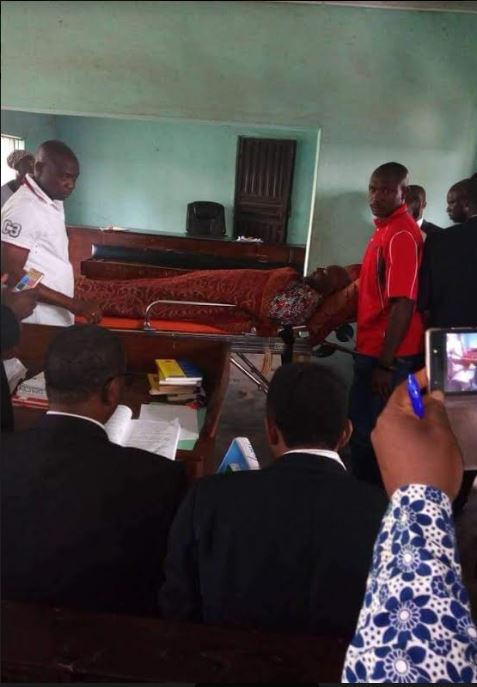 A senior magistrate court sitting in Lokoja, Thursday ordered that Senator Dino Melaye representing Kogi West senatorial district be remanded along with two others in the police custody till June 11, 2018.

Melaye who came in a hospital stretcher was brought to the court on a six count charge that bordered on illegal possession of firearm, criminal conspiracy and illegal transfer of firearms, among others.

When the charge sheet was read, the prosecution counsel, Alex Izinyon, while citing relevant laws said the allegations levelled against the accused persons were too weighty and not ordinarily bailable.

He, therefore, prayed the court to remand senator Dino Melaye at the prison custody while the two accused persons who implicated Melaye, namely Kabiru Seidu aka Osama and Nuhu Salisu aka small be remanded at the police custody.

But Melaye’s Counsel, Mike Ozoikeme while objecting to the prayer of the prosecution, swiftly moved for Melaye’s bail, citing Section 97 of the penal code and Section 56 of the Kogi state administration of criminal justice law which say the offences were bailable.

He also presented two medical reports from the national hospital which showed that Melaye is bedridden owing to a spinal chord injury he sustained and said he cannot jump bail, stressing that as a vocal senator of the Federal Republic of Nigeria, he could not have jumped bail.

But the prosecution counsel, Alex Izinyon swiftly objected the bail application, saying Melaye had earlier escaped from a lawful police custody and that for the counsel to say he was a vocal senator “means he is influential and can move and unmoved anything.”

At the middle of the trial, Melaye suddenly woke up from the stretcher and looked around the court, and minutes later, the doctor that led a medical team to the court rushed to him and supplied him an inhaler.

The trial judge while giving his ruling said the court had listened carefully to the submissions of both counsels and concluded that the case was not bailable.

He, therefore, ordered that all the three accused persons be remanded at the police custody while Melaye should be allowed access to his medication, and adjourned the case till June 11 for mention.

Controversy, however arose as to under which police custody should the senator be kept, even as his counsel was heard expressing fears that his client “will be killed”, if remanded anywhere in Kogi State.