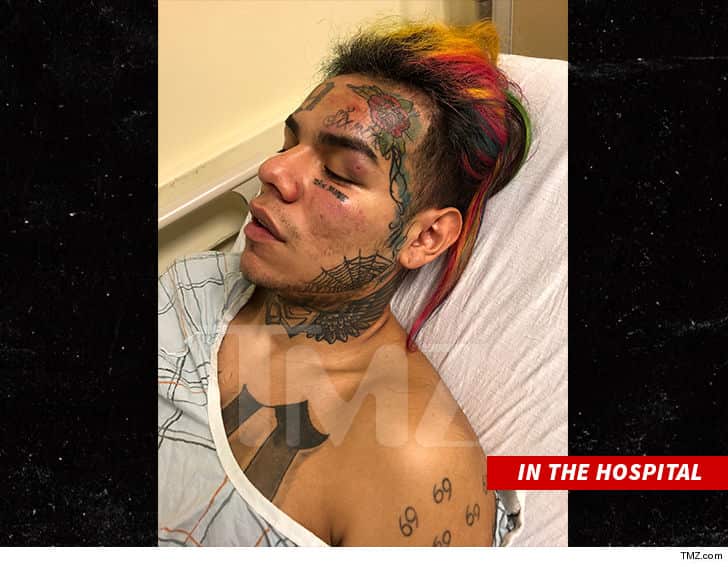 UPDATE:  9:30 AM PT   Tekashi told a different story to cops. Law enforcement sources tell us, they ended up interviewing 69 and he said the following:  At around 4:25 AM Sunday, he was a passenger in a Chevy Tahoe at a Brooklyn intersection, sitting at a red light, when a car bumped them from behind.  He told cops 2 men with guns jumped out, stole the driver’s iPhone and then grabbed Tekashi and dragged him into their car and sped away.

Law enforcement says they drove to Tekashi’s home and he called someone inside — presumably his baby mama — and asked her to come down with his jewelry … which she did.   According to TMZ, Tekashi then told cops he managed to escape and reported the incident to cops, but then became uncooperative.  He checked himself into the hospital.  Our sources say they have no idea how Tekashi was injured.

The 2 stories are obviously different.  As for why … Tekashi has bragged that people don’t mess with him.  The version he told his people make him look harder than the version he told cops.  You be the judge, but it seems pretty easy to figure this one out.

Tekashi69 was kidnapped, pistol whipped and robbed and is now in the hospital … TMZ has learned.

According to TMZ, the rapper was working on a music video in Brooklyn early Sunday morning and at around 4AM he wrapped for the night and drove home.  We’re told when he got there another car pulled up and blocked his driveway.

According to TMZ 3 hooded gunmen got out of the other car, grabbed Tekashi and pistol whipped him … knocking him unconscious.

Tekashi knew, he was in the back seat of the car as the gunmen were driving around, telling him if they didn’t get what they wanted from him — jewelry and money — they would kill him.

Our sources say a short time later, the gunmen pulled up to Tekashi’s home and 2 of them made their way inside as the third guarded 69 inside the vehicle.

The gunmen took around $750k in jewelry and between $15k and $20k in cash.  While all this was happening, Tekashi’s baby mama and daughter were inside the house but not hurt.

That wasn’t the end of it.  according to TMZ, the gunmen then drove away with Tekashi still in the back seat.  At some point 69 was able to open the back door and jumped out.  One of the gunmen began chasing him but got scared and retreated because he was afraid he’d be ID’d.

Tekashi jumped in the passenger seat of a stranger’s vehicle and pleaded for help.  The stranger called 911 and then asked 69 to get out of the car at an intersection.

An ambulance came and Tekashi was taken to a hospital, where he remains.  Doctors are performing various tests, including a CT scan.