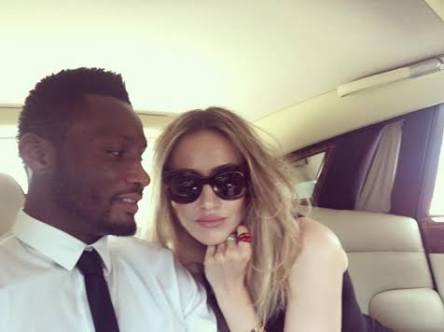 Olga Diyachenko, the wife of Super Eagles captain, John Mikel Obi has reacted to reports that her husband neglects his father and family.

DailyPost reports that Chief Michael Obi, the father of the professional footballer and Super Eagles Captain, had claimed that he hadn’t spoken nor seen his son for 5years.

The 74-year-old was quoted as saying, “My relationship with Mikel is an issue, but we don’t know what to do. It’s over five years now without a phone call from him to me. But he communicates with his mother.

“There is nothing I have not done to fix it. God has told me that I should not feel hurt. When we start to talk about it, I say, ‘Well, as long as I see him on TV, doing great, no problem’.

But reacting, Olga while responding to a fan on Instagram revealed that the Chelsea star renders help to his family.

The fan had said, ”Beautiful queen, please tell your husband to help his family members and answer his father’s calls. Thanks.”