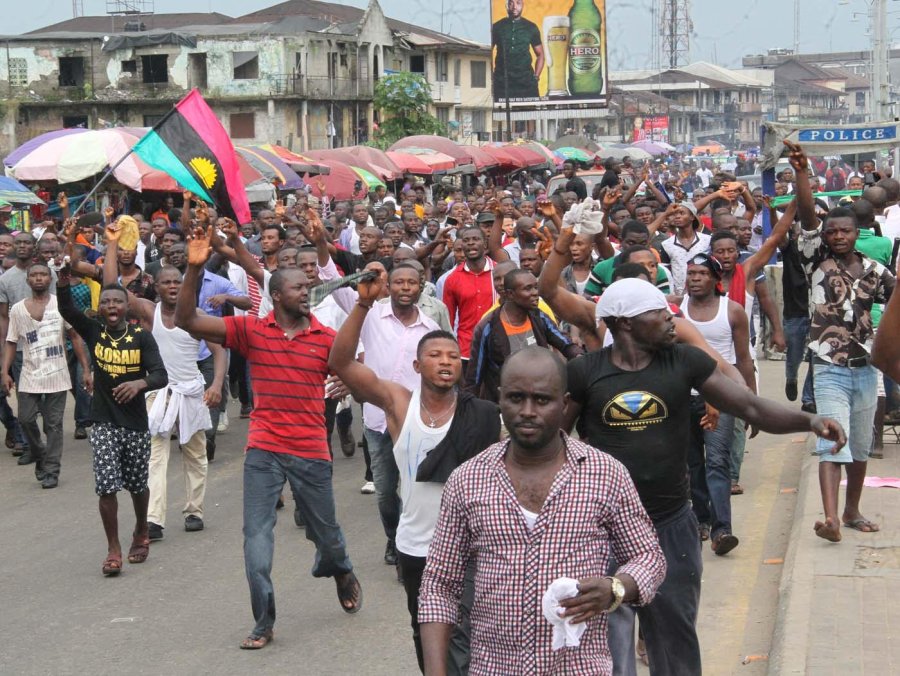 The Movement for the Actualization of the Sovereign State of Biafra, MASSOB, in collaboration with Biafra Independence Movement, BIM, in Ebonyi State has passed a vote of no confidence on the All Progressives Grand Alliance, APGA.

The group stated that the vote of no confidence on APGA was based on the insults given to Bianca Ojukwu during the party’s senatorial primary.

MASSOB warned that they would strip naked and attack anybody using Ojukwu’s image during the forthcoming 2019 general election.

The statement reads: “All Progressives Grand Alliance, APGA, was formed by late General Dim Chukwuemeka Ojukwu as an umbrella political party for Ndigbo to champion their interest and promote their image.

“But the reverse became the case when Mr. Peter Obi assumed office as the governor of Anambra under the platform of APGA . Instead of Obi to use the party to protect the interest of Ndigbo, he used it to victimize Ndigbo, both young and old.

“In fact, those of us who are fighting for the liberation of Ndigbo from the bondage of slavery in the hands of Nigeria were heavily attacked under Obi.

“Similarly, Obiano Willie also assumed office under the umbrella of APGA, but the same thing as being playing out.

“Recall that when Obiano was seeking relection last year, he was supported by the wife of Ojukwu, Bianca Ojukwu. She fought tooth and nail to ensure the return of Obiano and protect the image of Ojukwu. MASSOB-BIM as well fought day and night to stop IPOB plan to thwart Anambra election. They are biting the finger that fed them.

“The last straw that broke the camel’s back was what happened during the recent senatorial primary, where Victor Umeh and others were give tickets to run for senatorial election in their various senatorial zones.

“But in Anambra south, the home of Ojukwu the reverse was the case. Mrs. Bianca Ojukwu stood for Senate, but she was pushed out and insulted, thereby dragging the image of Ojukwu in the mud.

“Therefore, we the Movement for the Actualization of the Sovereign State of Biafra and Biafra Independence Movement, MASSOB-BIM have declared and passed vote of no confidence on APGA as a political party in Nigeria, and as an umbrella of Ndigbo.”