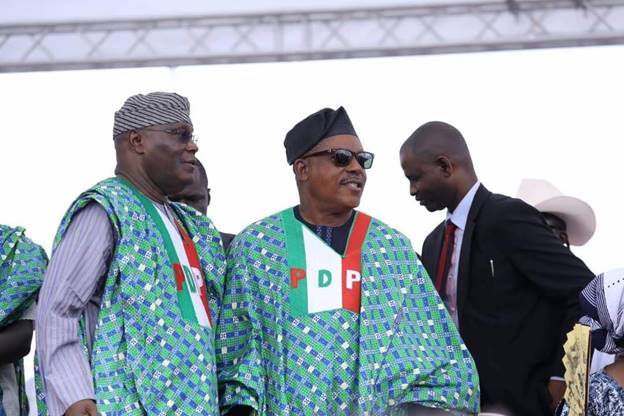 Atiku Abubakar, the presidential candidate of the Peoples Democratic Party (PDP) has promised to harness the great potential that abound in the small and medium enterprises in Nigeria to create jobs for the nation’s youths.

He said that Abia had become popular as the centre for small and medium enterprises (SMEs), adding that he had developed the strategies to make the state the hub for small businesses in Nigeria.

He said: “I am going to work with your governor to make sure we create millions of jobs for SMEs. Aba is the headquarters in the whole of Nigeria.

“We will create that hub and make sure Aba serves the rest of Nigeria. By doing that, we are going to create millions of jobs for our young men.

He thanked the people of Abia for supporting PDP and urged them to protect their vote during the election.

Abubakar further said that the 2019 general elections would go a long way to determine the future of the nation, adding that it was pertinent for Nigerians to vote wisely.

Earlier, the National Chairman of the party, Chief Uche Secondus, said that PDP was committed to preserving the unity of Nigeria.

Secondus urged the people of Abia to vote massively for PDP candidates at all levels of the elections.

He also advised the electorate to take measures to protect their vote and resist any form of malpractice.

He called on the relevant agencies to put the necessary strategies in place to ensure that the elections would be free and fair.

News Agency of Nigeria (NAN) reports that Abubakar had an interaction with the Abia traditional rulers, where he urged them to mobilise their subjects to vote for all the PDP candidates at the polls.

He described the general elections as an opportunity for Nigerians to exercise their right to choose their leaders.

He said that as the traditional institution closest to the grassroots level, the monarchs had the capacity to influence the people’s choices.

He said: “Since the creation of Abia state, all the progress that has been recorded in the state has been made under the PDP-led government.

“It is good for the people of Abia to be consistent and consolidate on the progress made in the state,” Atiku said.